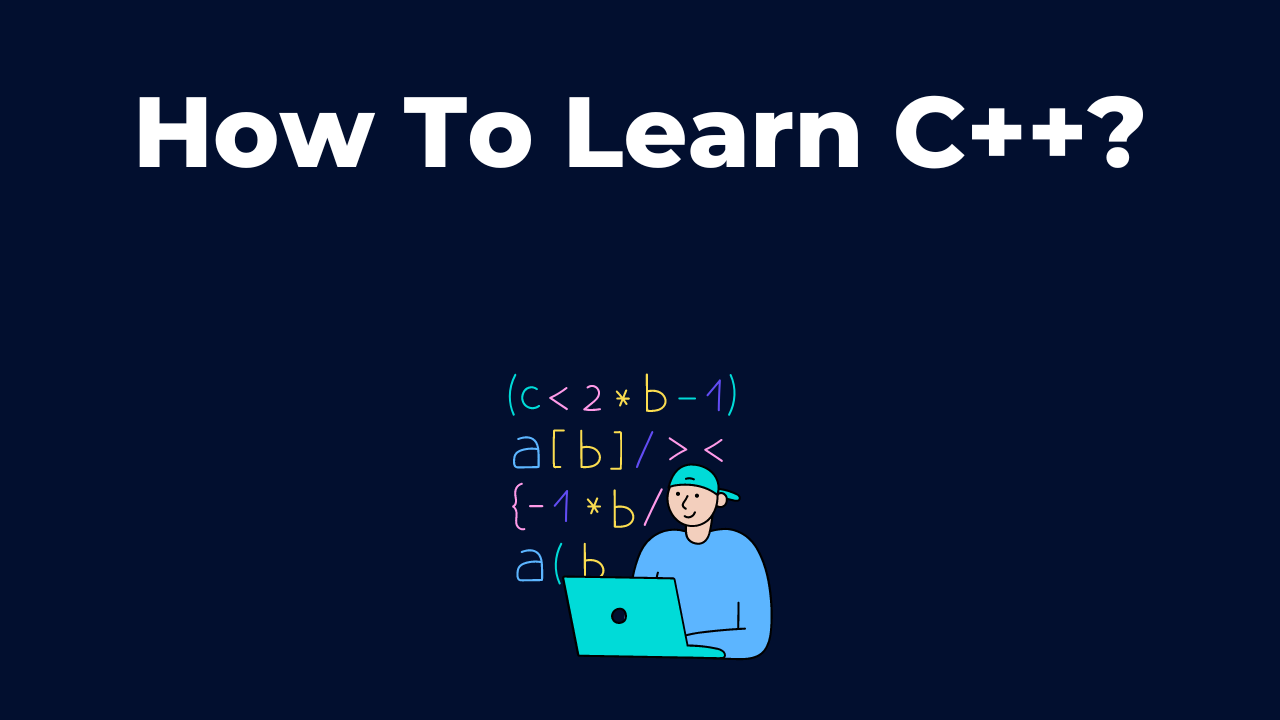 C++ is one of the most popular programming languages.

It is a general-purpose, object-oriented language that is used in the creation of various high-performance systems, graphical user interfaces, browsers, games, applications (and their back end), operating systems, etc.

C++ is one of the most functional, flexible, and powerful languages.

There are a plethora of resources in the market (both online and offline) to learn C++.

There is not a single reason why you shouldn’t learn C++. In 1995, getting started might have required spending money on a proprietary compiler. But today, you have everything available online and too for free.

So what are you waiting for?

To understand and learn C++, you need to be familiar with all the terms and components used in this language.

Predetermined names that can be used to identify things in your code. Keywords are identifiers for particular objects, variables, or actions. You can also make your own keywords.

Variables are like containers that store values. To declare a variable, you must give it a value and a type using the correct keyword. All variables in C++ need a name, or identifier.

Classifications for different kinds of data you can use in a program. Data types tell our variables what data they can store.

There are three data types in C++:

Strings are objects in C++. They are a set of characters within quotes, like our “Hello World” string. You can perform functions to them, like the length () function, which determines the length of a string.

These are symbols that manipulate our data and perform operations. In C++, we can overload operators to make them work for programmer-defined classes. Overloading an operator basically means that an operator can have more than one function at a time.

There are four kinds of operators in the C++ language:

A collection of data that we can act upon. All the objects in C++ have an attribute (its traits) and method (its abilities) and can be constructed using a class. Think of this like a blueprint for an object.

These are blocks of code that run when they are invoked. Functions are basically the workhorse for your program and are used to perform operations and manipulations on your code. They help to better modularize your code. C++ has predetermined functions, for example, main (), void () etc.

To create a function, you have to give it a name (called the declaration) and parentheses (). You can then invoke this function at any point by using that name ().

Conditional statements let you perform checks on whether a block of code should be executed or not.

There are four conditional statements:

Similar to conditional statements, loops execute blocks of code as long as a certain condition is reached.

There are two types of loops in this language:

Before getting started with your coding journey, you need to learn and become familiar with some tools and softwares which are important in C++.

You need a text editor to write C++ programs. A text editor is like a blank MS Word document where you write codes. You can use any text editor, some devices/systems even have an in-built editor in them. But it is always advisable to use a text editor which is specifically designed for coding.

Here are some of the most commonly used editors for C++:

Compilers are software or programs that are run through command-line interfaces (CLIs). They read the entire program and translate it into object code, which is a sort of program source code that the computer uses to run the program immediately. Some of the most commonly used compilers are:

Once the job of the compiler is completed, the object file is transferred to a linker program which performs the following functions:

Integrated Development Environment is a one-stop-shop for C++ programming. It is a tool that includes and does the work of a text editor, linker, compiler, and libraries. Most programmers use IDE instead of using a compiler and text editor. Here are some of the best cross-platform IDEs:

How to get started with C++ Programming

You will need a compiler to get started with C++ or you can also learn the language by experimenting with “hello world” C projects in-browser.

A lot of good compilers are available on Windows nowadays.

Visual Studio is a great option for anyone getting started with C++ or primarily targeting the Windows platform. It helps in building both C and C++ programs. It is a powerful tool with a feature-rich IDE.

This program is one of the most widely used programs for coding nowadays as it is very flexible, functional and is also available for Linux and Mac environments besides Windows.

Next in the list are GCC (MinGW) and Codeblocks IDE. These programs are more standard-compliant.

Another great option is Clang. It has become sort of a formidable choice on Windows since it’s used to build Google Chrome.

Some other cross-platform IDEs are Eclipse CDT, JetBrains CLion, NetBeans etc. These programs provide fully functional C++ development environments but lately, these have been overshadowed by a much better and popular program Visual Studio Code.

Cross-platform IDEs such as Eclipse CDT and Codeblocks IDE work as well on Linux as they do on Windows.

When working on Linux, you need to install GCC (an essential part of your distribution) but if you have not installed it yet, you can do it in a few seconds/minutes using this command:

For Mac, you can use GCC (GNU Compiler Collections). It is a set of compilers and development tools.You can also use Clang. Both of these tools are available for free.

GCC supports a wider range of C++ standards whereas Clang works fine in most cases.

Clang should already be installed.

For installing GCC, you can use Homebrew:

You can also use the IDE – Xcode, one of the most popular Mac OS developer tools.

How to Succeed in learning and Master the C++ language

Focus on learning the fundamentals

Having a thorough knowledge of the basics of the language such as strings, functions and arrays will help you master it quickly and easily.

Syntax is the basic foundation for everything you’ll write in C++, you can say it is like the grammar of a programming language. And so it is very important to understand and learn the syntax if you want to master the language.

Learning to code is similar to learning any other skill. It requires a lot of practice and time. If you want to learn and master C++, be persistent and don’t be afraid or reluctant to make mistakes. The more errors you make, the more you’ll learn about this language.

Today, there are so many resources (both online and offline) from where you can learn any coding language. Subscribe to some quality courses or derive knowledge from books and online tutorials and lectures.

Here are some C++ resources which can help you to kickstart your programming journey.